...well so this is the open mic that feels the most like home to me. The Dundas Odd Fellows Hall Music Club open mic is relaxed, has a familiar cast of characters, and is eclectic and accepting... it's like a songwriting workshop without all the sitting around taking notes (NB I have never actually attended a songwriting workshop, so that's just what I imagine...).

Hosted by trombonist Jay Burr (who is also an Odd Fellow and does the sound) and singer-songwriter Danny Medakovic (an odd fellow but not an Odd Fellow, far as I know - Hi Dan!), this open mic is held once a month at the Odd Fellows Hall in Dundas (the western edge of Dundas, really) and features a super-attentive and supportive audience comprised mainly of other musicians.

Genre-wise it's often a weirdo eclectic hodge-podge of musics, from Nirvana covers to east coast traditional music to opera to solo piano stuff (e.g. Fur Elise mashed up with House of the Rising Sun) to  blues to straight-up rock'n'roll. Everyone jumps up and in at any point in any tune, people flounder their way through stuff they only half know (because that's okay here!), and there's lots and lots of people trying out new original material. This is really an open mic for artists, in the broadest sense of the word.

here is a picture of the space:

The sound system is quite respectable, featuring a proper sound board and sound guy, multiple guitar plugins, various mics, monitoring, a Rhodes, a full drum kit, a few amps, and the requisite woven carpet to play on... Jay is pretty quick to pick up on people jumping up (tonight there was at least violin, sax, trombone, djembe, trumpet, and backing vox) and mixing them in tastefully. There's even a music stand (and I wasn't even the only one using it).

Beer is $5 a bottle (nothing on tap), and tips all go to the Trillium foundation for disadvantaged kids. In addition to the 8-or-9-beer selection, tonight there was also a smattering of snacky foods strewn along the bar and available for a donation.

This feels more like a potluck than an open mic. It's warm, it's friendly, it's accepting and supportive, and it tends to push the performers to be more adventurous and courageous than they might otherwise, trying out unusual or even unfinished ideas and music, which is great!

It also happens to be one of the very few open mics that is all-ages, which makes a BIG difference to people like Hannah (aged 12? 13?) who played this evening. Maybe Democracy is also all-ages (?), but this one even starts at the kid-friendly hour of 7pm.

This was my third time @ the Odd Fellows and I'm totally gonna go back as often as they're there!

Turns out Hipster molting season is upon us. Who knew?!

So full disclosure: the West End Pub has been a secret haunt of mine for about a year. Tucked away onto a corner down Emerson Street near McMaster, they have a decent selection of beers, great pub food, a lovely little patio, and friendly staff. So when I found out there was an open mic there on Sunday nights, it felt like a bit of a homecoming! 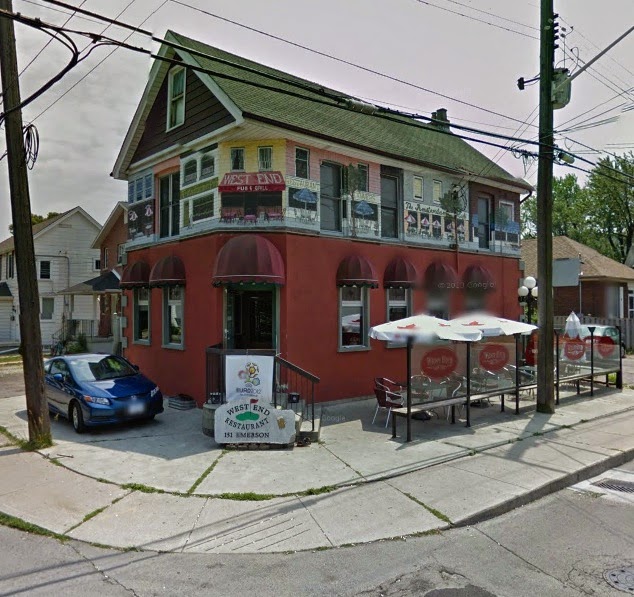 I got there at 9:30 and I was quite early (luckily so was my friend Jack...!). Turns out this one really does start closer to 10pm.

Hosts Kim and Frank Koren, stalwart luminaries of the Hamilton scene, started with a polished set of originals and covers, and then opened it to the floor, first-come-first-serve. This should of course have meant I went first, but I deferred (evilly) to Jack, knowing he can hold his own as a fairly accomplished guitarist. Another performer and I sat through his set, drinking our free pints (yup! yay West End!) and anticipating our own sets. The sound system the Korens bring in includes two stand-mounted speakers, a proper mixer, a couple vocal mics, and even a music stand (on request), so it was a balanced musical sound overall.

I was second, and by that point the crowd that had arrived was already a solid split of regulars (acting, naturally, like mouthy regulars...) and performers. My zeal for a music stand left enough of a gap for the smokers (apparently 2/3 of the audience) to imagine they'd have time for a couple drags, so I ended up playing a subdued set (all except for the last song, which turned suddenly into a comedy act when I sang "farts" instead of "hearts") to a pretty empty bar, but it was nonetheless a nonjudgemental (and I say that with new authority) and supportive audience, with an age mix of early 20s to likely mid-50s.

The other acts were clearly musical people, though perhaps, like me, still not quite as seasoned as the Korens, so it was a good place to work out the kinks in new or in-progress material for sure. I'll be back every couple of weeks I hope! 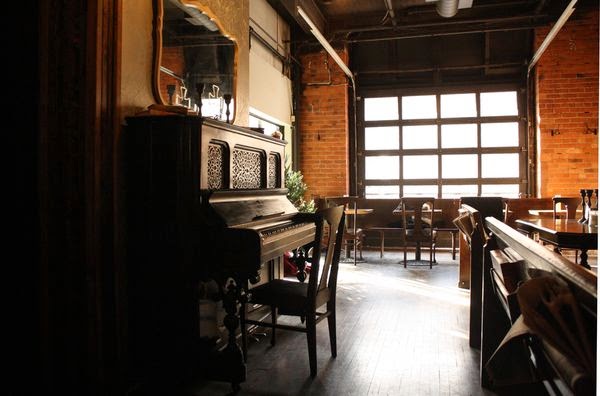 [Alright so a few things right off the bat: this is my new favourite spot in Hamilton. Head and shoulders above anywhere else. I plan to spend what little extra money I might have, here, as often as possible. It's awesome. Also, they have good beer and good people. If I'd had a sleeping bag I might have stayed over... I do have yet to eat anything there, but I'm hopeful! anyway ahem...]

I arrive early and grab a regal seat near the front... an old 1890s upholstered thing in throne red with a high back. The whole establishment is a Toronto-esque hodge-podge of antique chaises and sofas, with religious icons in alcoves and on walls, a tea bar on one side and a proper one (showing my bias) on the other. Pints of Amsterdam Blonde and Nickelbrook BufCafé are $5.75, so the bartender – complete with bowtie and waxed moustache (are all bartenders Hipsters now?) – pulls me a pint of the latter and I take a seat. The sound guy (who it turns out also books the night) worries busily over cables and speakers and stands, but still has time to graciously fetch me a music stand for my lyrics, even though I'm not on for at least 90 mins. It seems like a pretty serious setup, sound-wise, and as the evening gets underway I'm not disappointed by the sound, on-the-fly as it inevitably is what with 15-min time slots and different gear every set.

The crowd: selectively attentive fairly arty 20-somethings. I feel like people did in fact bring their own crowds, which is really nice for those performers, but some sets got chatted through more than others. Not loud, mostly, but a low buzz; a din.

What impressed me most about this particular open mic – and maybe it was just this night? – was that virtually everyone who took the stage sang originals. In 3 months of attending open mics I've only come across this once before, and that was at the Oddfellows Music Hall in Dundas with Danny Medakovic and Jay Burr. Also a fair proportion of songwriters @ the Corktown, but it's like 50%. Here performers get 3 tunes, no more, and so song selection is crucial: what is most important to this singer this set? What does he or she want to say that will be representative of them in such a short span?

It was a really impressive turnout talent-wise: lots of variety in genre and style, but all filtered through acoustic guitar and solo vox, such that there was nonetheless a thread of similarity, if only in the vulnerability of being laid so bare. I'd say maybe an overall grade of 7.7/10? That's great for an open mic!  Kinda ranged between 6 and 9. (and that's super-subjective; so take it with a great big snobby salt lick of salt). Totally going back!